‘An Engineering Past’ aims to explore, celebrate and share Grantham’s rich engineering heritage in collaboration with local communities and heritage partners through the creation of a 10 minute film.

The script ‘An Exploded View’, written by Neil Edwards was created using research and interviews with current and retired Engineers from Grantham. The information collected has formed a moving, fictional story that is rooted in historical truths;

The project has been developed in collaboration with Laura Barrett who creates intricate black white monochrome illustrations and patterns. ‘An Exploded View’ will be brought to life through an audio play, animated by shadow performance. The final process will see actors placed inside Laura’s illustrations to produce a unique and visually stunning short film. The project is a development of ‘Edith’s War’ undertaken in 2015: www.youtu.be/10cAPwVgoyQ.

In an attic full of history and wonder. Amber (16) searches to find her grandfather Ernest’s, most treasured item, hoping that it will bring him comfort and joy as he lies desperately ill in hospital. What she stumbles upon is a lifetime of memories, unearthing Ernest’s passion for and commitment to engineering. Never has Amber so deeply considered the role of an engineer, their importance in her home town of Grantham or the world changing effect that that the notion to simply ‘improve something’ can impose.

The film was due to be premier at Gravity Fields Festival in Grantham, a large science, engineering and arts festival, which attracts over 80,000 people. Due to lockdown restrictions, sadly this has been postponed until September 2022. In the mean time the film will preview at Grantham Guildhall Theatre in 2020 and will be submitted to film festivals across the globe to widen its reach.

Emily has been working in film and theatre for over 10 years, in this time she has developed as a highly skilled freelance producer, director and practitioner working on wide variety of projects across Yorkshire and the East Midlands. As an independent producer of film she has worked on award winning shorts and has recently completed her first feature length project Small Town Hero (2019). As one of two Artistic Directors of Shooting Fish Theatre Company she has lead on a host of projects funded by organisations including Arts Council England, the Wellcome Trust and Heritage Lottery, supporting the organisation to produce high quality new writing work which has toured nationally.

Neil has a broad background in many cultural and artistic fields, but in recent years has been developing his career as a writer and scriptwriter. He has written for theatre, radio and film, moving effortlessly from comedy and satire to drama. Neil also writes short-stories, flash-fiction and reviews, drawing from a sharply developed worldview. He holds a BA in Video and Film Production and an MA (distinction) in Writing for Stage and Broadcast Media form the Central School of Speech and Drama.

Laura Barrett is an illustrator specialising in intricate and decorative silhouette illustrations. Over the past 12 years she has worked for a variety of clients across publishing, packaging and animation along with large scale artwork for graphic installations and exhibitions. Her clients include the BBC, The Guardian, John Lewis, Orchard Books, Penguin Random House, The Science Museum and Ted Baker. Laura’s work is inspired by the darker side of folk and fairytales and traditional Schnerenschnitte (papercutting), which she creates digitally from her home studio in London.www.laurabarrett.co.uk

After studying Media Production at the University of Lincoln, David went on to more specialist training, shooting and editing TV news in Grimsby. After a few years of freelancing he joined Blueprint Film as Technical Manager remaining there for 10 years as a camera operator and editor, from short films and documentaries to radio plays and multimedia apps. David has recently taken the step to start his own company DCB Productions, delivering a range of visual and digital media.

Dan is an enthusiastic collaborator drawing on a wealth of experience in music and sound production. As an accomplished musician and performer, Dan’s passion for creating and manipulating sound grew out of his early days touring and recording as frontman with a ska-punk septet. He has since developed a career as an independent sound designer and composer, and is very much in his element working with creators of visual media and theatre.

Georgina is a drama facilitator and creative producer based in the East Midlands. Her work is rooted in the community using theatre to educate and bring people together. Current work includes: associate artist/actor for a number of theatre companies around Lincolnshire including Stand By Theatre, resident Artist for Paradigm Arts: running story-telling and immersive workshops in homes of looked after children and is also a bursary Producer for Coventry based, Imagineer Productions on their project Bridge. 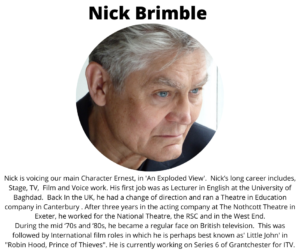 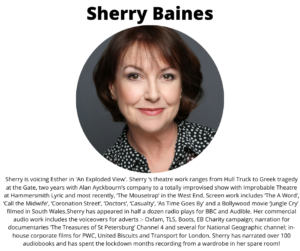 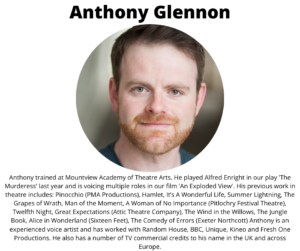 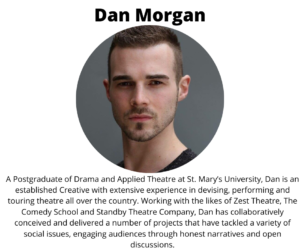 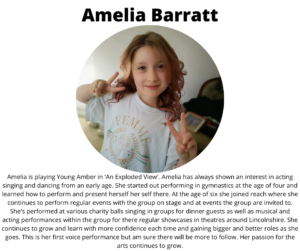